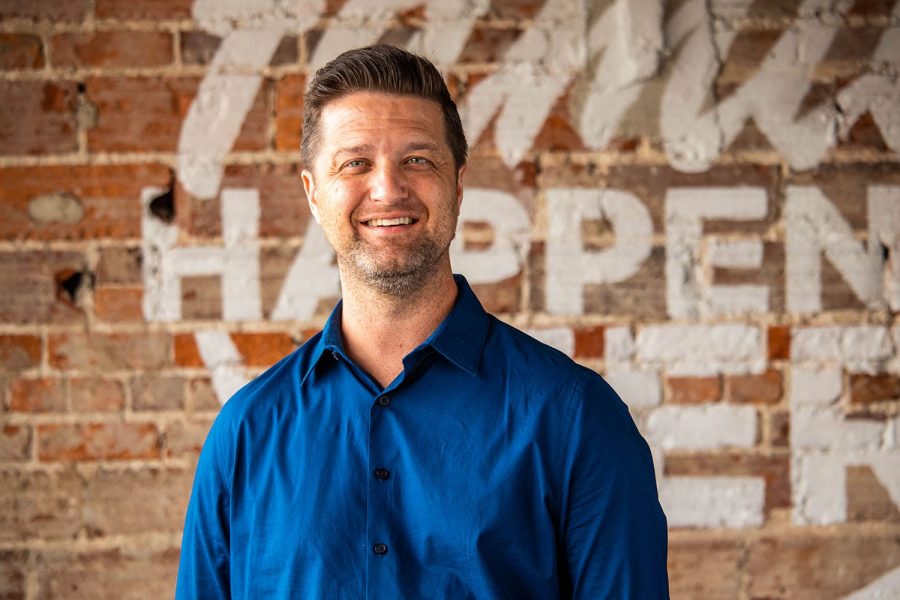 Pastor Jason grew up in the three-stoplight town of Walnut Cove, North Carolina.  Because of his upbringing, he knows what it is to grow up in a small, tightknit town, and that feeling of community and family has shaped how he views what a church can be, of what WE can be:  family.

Jason loves the Triad, so much so that when it came time for him to go to college, he chose Wake Forest University in Winston-Salem.  At Wake, Pastor Jason graduated with degrees in Religion and Biology.  He also met his wife, Kelley, where, believe it or not, they decided on their first date that they would get married one day.  He tells the story that she proposed to him on that date.  She rolls her eyes at the suggestion.  In 2001, just before Jason’s second year of law school, they were married, and now, they have three beautiful children, Jackson, Selah, and Eliana.

In 2003, while driving to one of his last final exams at Wake Law, Pastor Jason describes the moment when he heard God calling him into ministry like this:  “I was in that car praying for God to get me through this test, and I very clearly heard His voice saying, ‘Jason, you know that I’ve called you to be a preacher.  I’ve equipped you with knowledge of the business world, but you are to use that knowledge to build my church and to build people.’”

After graduating, Pastor Jason began work as a trial lawyer, but he never forgot that moment of calling.  In 2005, he began work as the youth pastor for a small start-up church in High Point, North Carolina.

In 2008, Pastor Jason felt the calling of God pull him deeper into ministry, and so with 12 people, he started Renaissance Church as a place where anybody, absolutely anybody can:  Find family.  Pursue purpose.  Share their story.  And experience life change.  The message caught, and by 2012, Pastor Jason stepped down as the youngest law partner in one of the largest law firms in the state to be what he is called to be:  a full time preacher and pastor.

While Pastor Jason never thought that he would practice law again, God had other designs, as Kelley, after giving birth to Eliana in 2013, convinced Jason that they could start a very small real estate closing business to help make ends meet.  Jason would spend most of his time pastoring, and Kelley would be the office manager.  Today, Pastor Jason and Kelley have built one of the largest real estate law firms in the Triad.

But Pastor Jason’s passion has always remained his calling, being the pastor of Renaissance Church.  Renaissance Church is a multi-generational, multi-ethnic family of believers.  “People just show up, and they’re loved extraordinarily.  That’s the way it should be,” Pastor Jason says.  “My life has been a story of pursuing purpose, but my story isn’t an anomaly.  Anybody, anybody who seeks God’s calling, God is going to show up and bless them.  They’ll find their purpose just like I did.”

“I’ve equipped you with knowledge of the business world, but you are to use that knowledge to build my church and to build people.”